For my final mountain bike race of the season (before I fully transition to trying to figure out how to race cyclocross effectively) I coerced Marcy to race the Titcomb Mountain Challenge 6-hr as a coed duo. We also enlisted friends Chris and Aimee to get the field started for this inaugural event. By race day there were 6 couples contending for the class. According to Strava, Marcy and I at least had a good chance in the race as we both had some of the fastest loops around the course (or at least what we thought was the course) leading up to the race. Unfortunately, the Wednesday before the race, Marcy was diagnosed with an ulcer in her cornea which meant that on race day she had to wear her regular glasses with sunglasses on top because bright light caused a searing pain in her right eye. Fun! 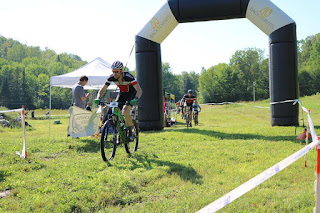 We decided that I would do the first lap to try to get us a gap on the other teams. At the gun, I went full in and nabbed the hole shot award and hit the climb first. I pushed almost xc pace hard through most of the lap and got a pretty good gap on the entire field until I cased a pointy rock and heard air and Orange Seal spewing from my front tire. F!!! I quickly pulled over to assess the situation. I first tried a quick shake of the tire to see if the sealant would fix the hole but, of course, it didn't. Thankfully I had a puncture kit with me and I was able to get a plug in the hole and the tire aired up just as Eric from the leading duo mens team caught me. 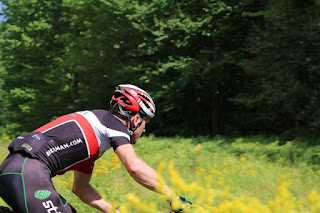 Descending at the end of lap 1.

I jumped on my bike and took off for the last 10 minutes of the race loop. Towards the end of the lap I started to feel my front tire getting soft and I started to lose the front end in hard corners. I had to back off the pace a bit to avoid crashing but was successful in finishing my lap, holding onto the overall lead by about 30 seconds and about 2 minutes over the second place coed team. 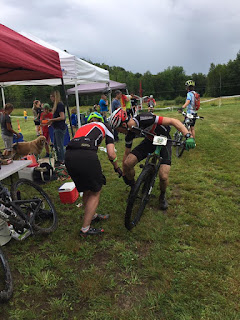 At this point, Marcy took the helm and I went about getting my bike ready for lap two. The whole time she was out, I worried about how her eye would handle racing and how she'd fare with two sets of glasses on. I had been forced to remove my sunglasses mid lap because they were getting fogged up from the very humid conditions in the woods. I could only imagine how fogged two sets of glasses would get... 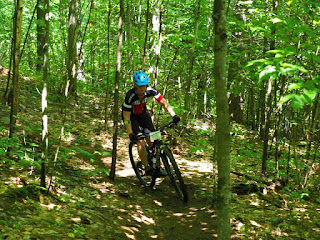 So much good single track!

Marcy rolled in within a couple of minutes of her expected time despite having a hard time seeing (resulting in a couple of minor wrecks and overshooting a couple of corners) and dropping her chain once. Not bad given the circumstances and her not having raced in several years! Unfortunately, we had lost the lead because of these issues and because one of the teams had their male teammate do the first two laps, but we weren't too far back so I took off on my planned two lap turn.

Before the end of lap one of my turn, I caught and passed both of the coed teams and had an uneventful lap two (thankfully!) and handed Marcy the baton with a narrow lead. Because of my double lap, Marcy headed out with the release of XC race categories and was also now out on course with a mix of men and women in the coed group. Marcy here: I made the mistake of easing up on my roll out to let the start of the sport XC race go by (thinking it was the expert women's category approaching)...oops! Guess I need to remember how to race! I slowly made my way back to a comfortable spot and had a cleaner run despite rolling a tire and burping some air. I also took a chance and removed my sunglasses for that lap; it paid off. A little fogging from the humidity, but no wrecks and I rolled in just after the second place team. 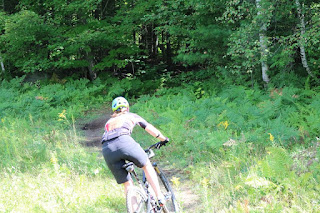 Marcy descending at the end of her lap.

Back to Rick: After the transition, I quickly passed the second place team (Hi Sarah!) and set about finding Nick who was probably only a minute up the trail. I started catching glimpses of him early in the first climb and foolishly thought I'd catch him quickly. But, as it turns out, Nick is pretty friggin fast and I had to dig deep to start reeling him in. It was well into the second half of the lap that I began to think that I wouldn't catch him by the end of the lap which would put us in a real pickle for what would likely be Marcy's (and our team's) last lap. Thankfully, the start of the last real climb of the lap is super steep and it must have done two damage to Nick because all of a sudden I rounded an uphill corner and I was on him. A quick pass and I was off to the races to finish the lap with as much of a gap as possible.

It was at this time that I began to do the math in my head. If I finished this lap at the pace I was going, I could theoretically do one more lap and still get back in time for Marcy to do her final lap but, if Marcy went out instead, she wouldn't get back in time for me to do one more. Of course, Marcy doesn't have the luxury of being in my brain and, as far as I knew she was getting ready to jump on her bike as soon as I came through so I decided to just see what she thought when I rolled in.

As I approached the transition area, Marcy came out and asked me if I could do one more. I wasn't sure if this was because her eye was messing with her or if she was still futzing with the tire she had burped a lap ago or if she had simply done the math as well, but I quickly accepted the offer and headed out for my fifth and final lap.

I had been averaging about a 41 minute lap. We had about 50 minutes before the cut-off so it seemed like I had plenty of time but with over 700' of climbing per lap and fatigue setting in, the possibility of cramps and a death march were definitely on the table...Most of the first half of the lap was uneventful until I heard a ping from the rear of the bike. I wasn't sure what it was but I was guessing I had broken a spoke in my rear wheel. I didn't want to take the time to assess (and I can't fix a broken spoke out in the woods anyway) so I rolled on. Unfortunately, my rear wheel started acting really funny and making odd noises whenever I drove hard through a corner so I had to tip toe a bit for the remainder of the lap. 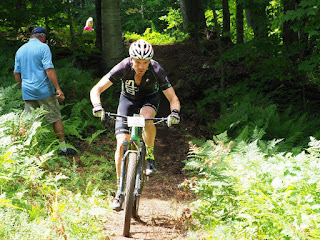 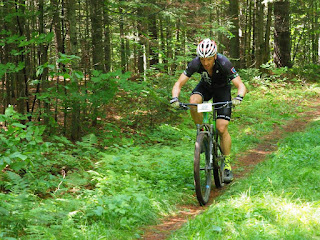 Me looks angry. I guess I was trying wicked hahd

I rolled into the transition area with about 2-3 minutes to spare on the cut off so the debate began. Marcy wasn't sure she wanted to do another lap and we PROBABLY had a big enough gap that Nate (from the current 2nd place team who was out on course) wouldn't come through before the cut off but, if he did and Marcy hadn't already gone out, the race would likely be lost so Marcy headed out for what she hoped would be a party pace lap.

Two minutes after the cut-off, Nate rolled through. At this point we knew we had the win so Sarah (also from the second place team) offered to find Marcy mid-course and tell her she didn't need to finish (Thank you Sarah!!) but, it turns out, Marcy was enjoying the drier conditions and wanted her third lap so she finished it and rolled across the line victoriously (she doesn't know that you're supposed to raise your arms when you finish). 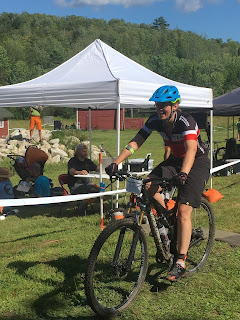 Sadly, the finish arch had to be taken down because
of a thunderstorm that had rolled through earlier.

Marcy and I ended up being one of two teams in the entire field to complete 8 laps. The other team were friends Eric and Billy in the mens' duo division. Not bad, I may have to coerce her into doing more of these!

The race promoter put on an excellent event with a really well laid out course, including a great mix of climbing, downhill, and tech. The friendly competition and encouragement between the co-ed duo teams made for a great day on the bike. 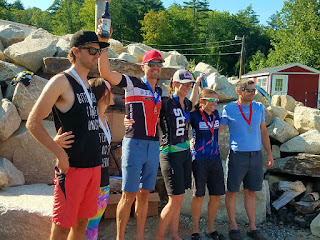 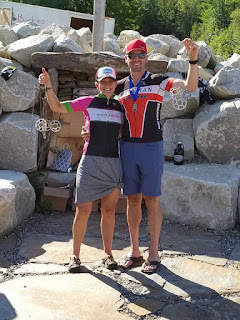 Hole shot podium with Hallie
the genius of rick is! at 3:28 PM

My little princess is so beautiful) I underwent using Dr Itua Herbal Medicine. I had a miscarriage 7 years ago. I still can’t hold back my tears when I remember that horrible period of my life. After my loss I couldn’t get back to life for a long time. I’m glad I have my husband. He gave me support I needed the most. Together we can do everything! We wanted to have kids for a really long time. We’ve gone through a lot, but if you want something badly, you’ll get it! I had to search online on how i can use herbal remedy due to my infertility then i came across Dr Itua how he cure all kind diseases and helped a lady from Kansas City to get pregnant so i contacted him on email,He gave me some guild lines to follow he also send me his herbal medicine via courier service which he instruct me on how to drink it for two weeks really i did and after 7 days of having intercourse with my husband few days later i noticed my period didn't come then i decided to go for check up i was pregnant with a baby,Dr Itua is a genuine miracle man..I've got pregnant from first attempt. We were over the moon! Our girls were born in May 2015. We've just celebrated their first birthday. Finally joy and peace came to our family.Here his Email/Whatsapp Number...+2348149277967/  drituaherbalcenter@gmail.com He cure the following...infertility Liver/kidney Inflammatory,Diabetis,Herpes Virus, Lupus, HPV, Cancer, Hiv/Aids, Hepatitis, Als, MS, Menstrual Cramp,  Fribroid.